Back To Home
The Lions support many great causes. Below is a number of 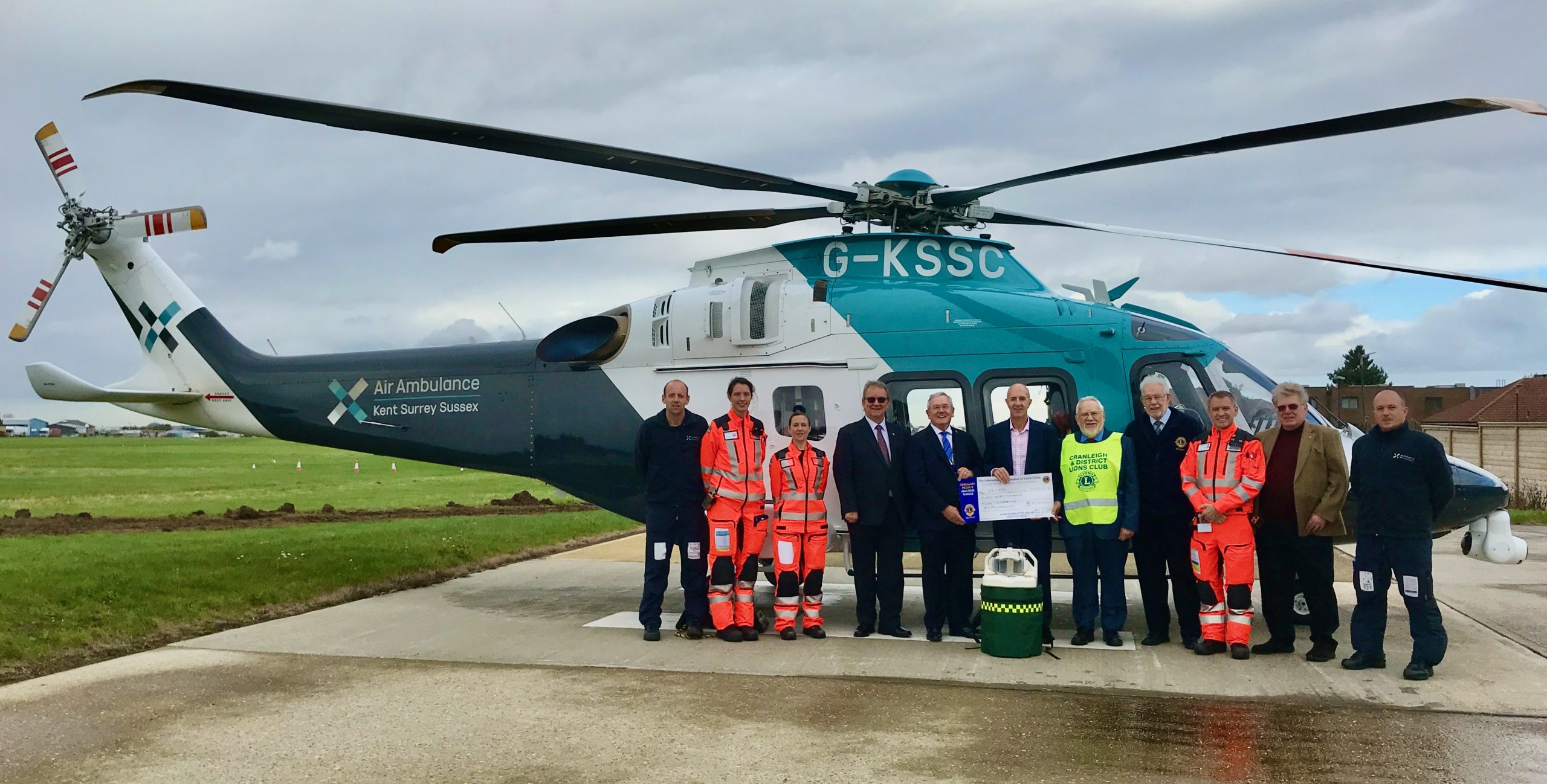 In June 2012 we pledged to raise £250,000 over a 10-year period to support the Air Ambulance Charity’s ambition to deliver a Helicopter Emergency Medical Service (HEMS) 24 hours a day. The charity began operating a 24-hour service just over a year later and Lions in the South East reached the quarter of a million pound fundraising target a staggering five years ahead of schedule.

Howard Lee, Chairman of the South East Lions Night Flying Appeal, said: “Lions are all about helping those in need within the community, which is exactly what the Air Ambulance is there for. We are really pleased to have been the catalyst to the development of the night flying service, and we will continue to work with them in other ways to help save more lives.”

The night flying appeal was so successful that some of the £250,000 raised by South East Lions Clubs was used to buy two response cars to allow the doctor and paramedic team to deliver enhanced care to patients throughout the night.

The latest appeal in District 105SE is to assist AAKSS wit

Air Ambulanonswork to provide head scanners in its helicopters. These scanners are still in the

trial stage but if the trials are successful they will transform the care that the helicopter doctors and paramedics can give patients with suspected severe head trauma. As at June 2019 we have collected around £61,000 towards the Scanner Appeal, of which £36,000 is committed for a head scanner, and £10,000 is committed towards patient trials. We await the results of the patient trials and once complete, the necessary permissions will be sought to use the scanner at the trauma scene and in the aircraft.

Since 1984, the Lions Clubs in the British Isles and Ireland have been financial supporters, endorsers and partners of Tacade in providing lifeskills based education initiatives and resources for those working with children and young people from the ages of 3 to 19 years.

Tacade was a leading charitable organisation in the United Kingdom working in the field of personal, social, health and citizenship education and a pioneering force promoting interactive participatory health education. The work soon developed beyond the school setting to working with youth organisations, the police and prison service. The charity then became known as the Advisory Council on Alcohol and Drug Education. During the 1970’s the work expanded beyond alcohol and drugs education to other areas of personal, social and health education and the organisation became known simply as Tacade.

Over 75% of the 20,925 primary schools and more than 60% of the 4,168 secondary schools in the United Kingdom utilise Tacade’s resource material.

Partnership working was central to the charity’s success and a particularly important year was 1984, as the charity established a strong and effective alliance with Lions Clubs International, which of course include Lions Clubs in the South East.

Unfortunately, in February 2012, Tacade entered voluntary liquidation; however the Lions Clubs of British Isles and Ireland were successful in acquiring the stock of publications, the publishing rights and the intellectual property of Tacade.

Now the new organisation Lions MD105 Lifeskills Ltd are able to continue with the provision and development of lifeskills based resources to address the health and wellbeing for all children and young people.

Founded in 1976 the Lions International Blood Research Appeal (LIBRA) has as its sole purpose fundraising for the Haematology Department at King’s College Hospital in London, benefiting patients with blood cancers and disorders. We reply on support of the public, King’s patients and their families, and Lions Clubs across the UK to raise vital funds. Lions Clubs in District 105SE are proud to be supporters of this work.

Blood disorders and blood cancers affect people of all ages and with our help King’s can provide patients with the best care and treatments available, ultimately saving more lives. Donations are used to cover the cost of ward and laboratory developments, along with state-of-the art equipment that is vital in the treatment process.

Lions and Sightsavers have been working together since 1972 with Clubs in the South East and elsewhere making donations to the Lions Sight Savers Trust, a registered charity.

Initially, donations from Lions Clubs supported a Sightsavers eye camp outreach programme in India, focusing on cataract operations. But many people arriving at the eye camps had other eye conditions or impairments that couldn’t be treated, and this led to the development of the Comprehensive Eye Services (CES) programme, which aimed to support everyone with a sight-related problem.

The CES programme provided assistance for blind and visually impaired children to attend inclusive schools, and referred eye health issues for treatment or surgery. It also supported rehabilitation training for adults whose blindness was irreversible, and educated communities on disease prevention and recognising eye conditions.

In October 2014, the trustees agreed to direct donations from Lions Sight Savers Trust to A Million Miracles, Sightsavers’ appeal aiming to raise funds for one million sight-restoring operations by 2018. So far, Lions Clubs have raised an incredible £116,000 towards the appeal. With cataract operations costing as little as £30, these donations mean more than 7,300 people will have their sight restored, saved or protected.

The MedicAlert Foundation UK has been providing assurance and life-saving support to its members since 1964. As the original and best provider of medical ID services, MedicAlert is a small, friendly and productive charity with its own production unit and member support team including in-house medical professionals.

MedicAlert have a tradition of partnerships with organisations that share their ethos of promoting safety and well-being. Lions Clubs International is one such organisation which shares their ethos. Through their partnership provision of peace of mind for many families is made possible via an Early Start Programme.

The Lions Early Start Programme offers free membership every year for children, up until their 10th birthday. This membership provides children with a personal electronic record to securely store their information including comprehensive medical history, directives or precautions to ensure no time is lost in an emergency.

The scheme ensures that the  child will also receive their first item of medical ID jewellery for free.
The disc is engraved with their immediate details, their membership number and a 24/7 emergency phone number, so that first responders can access the child’s electronic record.